Why Your Shopify Business Should Never Use Fake Reviews

Are you seeing a ton of sketchy, questionable, or obviously fake reviews online these days?

Fake reviews are everywhere, from Amazon to Etsy, and the big e-commerce marketplaces have started cracking down. In fact, Google just removed 55 million fake reviews along with the million business profiles for violating their terms of service. And Amazon recently spent half a billion dollars and hired a team of 8,000 people to put the kibosh on fake reviews.

That’s bad news for those who pay for phony reviews, but good news for everyone else—from buyers, to sellers, to the platforms themselves, whose business relies on the trust we place in authentic customer reviews.

Fake reviews: Why would anyone take the risk when you can get authentic reviews?

Online marketplaces like Amazon, Etsy, the Shopify Store, and others represent a major distribution channel for e-commerce sales, and sellers work hard to increase their search ranking within these sites. In other words, they want to be the first product that pops up when you do a search for “curtains” or ” “stuffed unicorns.”

Put simply, one of the best ways to get to the top is through positive reviews. Getting positive reviews on e-commerce marketplaces is akin to getting backlinks on Google, so some companies will do almost anything to get them. This includes paying internet randos to order their products and write positive — and positively fake — reviews.

But, how do fake reviews work, anyway?

Even if you would never dream of paying for fake reviews, you’re probably a little curious to know how it’s done.

Harvard Business Review set out to answer that question, using a team of UCLA undergrads to infiltrate online Facebook groups that connect e-commerce companies with fake reviewers. These groups pop up for a stint, get banned, and return again in an endless game of whack-a-mole. Harvard estimates that Facebook groups alone are responsible for 4.5 million fake reviews every year.

Are fake reviews effective? Not long-term.

You may be wondering whether fake reviews are effective and whether they’re ultimately profitable if you don’t get caught.

Here’s the good news for e-commerce store owners that don’t pay for fake reviews. While they found that e-commerce products with fake reviews receive an initial boost of 0.16 stars when those reviews start rolling in (leading to a 12.5% boost in sales), the benefits tend to be short-lived.

In fact, once the real reviews start arriving—those from customers—the backlash tends to be swift. Perhaps it’s because real customers feel swindled by all the B.S. reviews, but in the weeks following the initial boost, product ratings fell 6.3% on average, and sales dropped by 21.5%.

What’s the worst that could happen? Well, you could get sued.

The ROI on fake reviews doesn’t look promising, but that’s not even your biggest concern if you go that route.

Amazon can actually sue you for posting fake reviews, and they recently did just that with over 1,000 sellers who featured 30-45% fake reviews. The lawsuits demanded that the sellers give up all their profits, pay Amazon’s attorney fees, and cover damages exceeding $25,000.

Most of you are reading this out of sheer curiosity, but statistically speaking, a handful of you might be tempted to pay for fake reviews.

We can’t tell you what to do with your life or your business, but do know that the e-commerce marketplaces will be hot on your trail—infiltrating those groups and coming after anyone who crosses them. After all, business is on the line, and so much of their success depends on reviews that customers can trust.

Instead of taking that risk, however, collect positive video testimonials from real customers post-purchase with VideoWise.

Check out our case study with Grill Rescue and how they collect 10x more authentic product video reviews with VideoWise.

See how VideoWise can sell more with video on your store. Put your video content to work today! 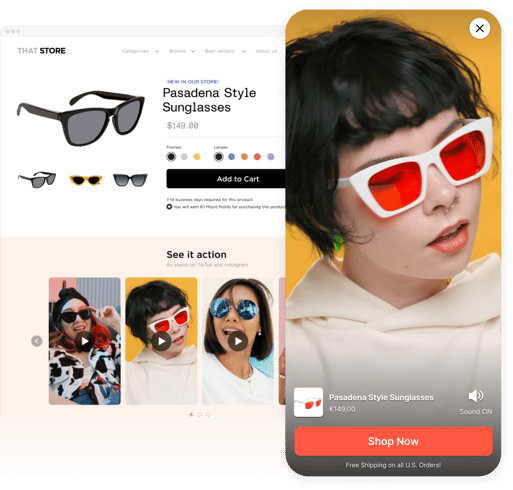